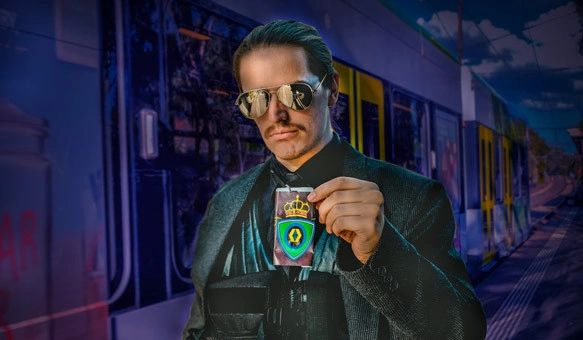 I think I laughed more in the 2 months I spent stage managing for Sevenfold than I did throughout the whole of 2020...

"These Are Their Stories. Beep Beep."

I couldn't believe my ears during my first script-read of Law & Order: PTV, the cop show parody about Public Transport Victoria's authorised ticket officers. I went home that evening (as I would after each rehearsal) with my cheeks and stomach sore from laughing, feeling happy and unexpectedly refreshed to be working on a hilarious comedy after doing so many dramas in a row.

I had applied for the stage manager role for Law & Order: PTV online, and upon being appointed I thought "Excellent! 2 months of happy Sundays, a fun show and a chance to work with some new people." What I didn't expect, was that these incredibly sweet and talented people would welcome me into their little family.

I've never known a show to have quite so many props and costume items (amongst my portfolio, it definitely knocked Drunkards and The D'oh Show off the top of the leader board for most bits and pieces).

Highlights of these included;

- a rhino horn, and a skateboard

- and the Bunnings snag I cooked each evening before the show and ceremoniously delivered from the staff room fridge, up the Butterfly Club's many, many flights of stairs to the stage.

In a testament to the well-oiled machine that was this cast, the dozens and dozens of backstage bits and pieces to organise were not of my concern. The team had them all under control, and I was instead asked to switch hats for the show run, taking on lighting design and operation (to a level of great success you can read about in the review).

Law & Order: PTV's popularity speaks for itself. After selling out weeks before opening night, eased COVID restrictions allowed us to release an additional 66 tickets that swiftly sold out also. Between Fae O'Toole's brilliant script and the comedic prowess of director Zac Dixon and the rest of the cast, Law&Order: PTV is an absolute knockout of a show. I'm so pleased to have worked on it, and greatly looking forward to the next project to come out of this powerhouse team.

Presented by Sevenfold Theatre Company, Law & Order: PTV was performed to completely sold out audiences at the Butterfly Club, May 10-15, 2021.

Further details can be found via the Sevenfold Facebook page, or click the 'Review' button below to read our review from Theatre Travels!